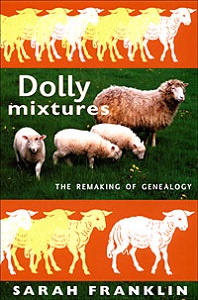 While the creation of Dolly the sheep, the world’s most famous clone, triggered an enormous amount of discussion about human cloning, in “Dolly Mixtures” the anthropologist Sarah Franklin looks beyond that much-rehearsed controversy to some of the other reasons why the iconic animal’s birth and death were significant. Building on the work of historians and anthropologists, Franklin reveals Dolly as the embodiment of agricultural, scientific, social, and commercial histories which are, in turn, bound up with national and imperial aspirations. Dolly was the offspring of a long tradition of animal domestication, as well as the more recent histories of capital accumulation through selective breeding, and enhanced national competitiveness through the control of biocapital. Franklin traces Dolly’s connections to Britain’s centuries-old sheep and wool markets (which were vital to the nation’s industrial revolution) and to Britain’s export of animals to its colonies–particularly Australia–to expand markets and produce wealth. Moving forward in time, she explains the celebrity sheep’s links to the embryonic cell lines and global bioscientific innovation of the late twentieth century and early twenty-first.Franklin combines wide-ranging sources–from historical accounts of sheep-breeding, to scientific representations of cloning by nuclear transfer, to popular media reports of Dolly’s creation and birth–as she draws on gender and kinship theory as well as postcolonial and science studies. She argues that there is an urgent need for more nuanced responses to the complex intersections between the social and the biological, intersections which are literally reshaping reproduction and genealogy. In “Dolly Mixtures,” Franklin uses the renowned sheep as an opportunity to begin developing a critical language to identify and evaluate the reproductive possibilities that post-Dolly biology now faces, and to look back at some of the important historical formations that enabled and prefigured Dolly’s creation.